A lady in a faded gingham dress and her husband, dressed in a homespun threadbare suit, stepped off the train in Boston and walked timidly without an appointment into the Harvard University President's outer office. The secretary could tell in a moment that such backwoods, country hicks had no business at Harvard & probably didn't even deserve to be in Cambridge .

"We'd like to see the president," the man said softly.

"He'll be busy all day," the secretary snapped.

For hours the secretary ignored them, hoping that the couple would finally become discouraged and go away.

They didn't, and the secretary grew frustrated and finally decided to disturb the president, even though it was a chore she always regretted.

"Maybe if you see them for a few minutes, they'll leave," she said to

He sighed in exasperation and nodded. Someone of his importance obviously didn't have the time to spend with them, and he detested gingham dresses and homespun suits cluttering up his outer office. The president, stern faced and with dignity, strutted toward the couple.

The lady told him, "We had a son who attended Harvard for one year. He loved Harvard. He was happy here. But about a year ago, he was accidentally killed. My husband and I would like to erect a memorial to him, somewhere o campus."

The president wasn't touched. He was shocked.

"Madam," he said, gruffly, "we can't put up a statue for every person who attended Harvard and died. If we

"Oh, no," the lady explained quickly. "We don't want to erect a statue. We thought we would like to give a building to Harvard."

The president rolled his eyes. He glanced at the gingham dress and homespun suit, then exclaimed, "A building! Do you have any earthly idea how much a building costs? We have over seven and a half million dollars in the physical buildings here at Harvard."

For a moment the lady was silent. The president was pleased. Maybe he could get rid of them now. The lady turned to her husband and said quietly, "Is that all it cost to start a university? Why don't we just start our own? "

Her husband nodded. The president's face wilted in confusion and bewilderment.

Mr. and Mrs. Leland Stanford got up and walked away, traveling to Palo Alto, California where they established the university that bears their name, Stanford University, a memorial to a son that

Harvard no longer cared about.

You can easily judge the character of others by how they treat those who they think can do nothing for them.

---- A TRUE STORY by Malcolm Forbes

It was a normal day in the OC except my parents and little sister were in town from Oregon.  Matt and I had been having a text conversation about who knows what and I had to pee.   So I placed my perfect phone; one that has been dropped thousands of times and still worked amazingly well, one that had all 70 of my contacts, pictures of random fun stuff, etc into my pocket.
Into the bano I went. I finished my business, flushed, and proceeded to pull up my blue plaid bermudas when suddenly and in what seemed like slow motion, my phone jumped out of my pocket and fell into the bowl of germs while the water was swirling counterclockwise. I gasped in disgust and went straight into phone survival mode as I stuck my hand into that water (which at this point was clean and clear BTW) and grasped for my phone.  It was just out of my reach every time I my fingers nearly clasped onto its antenna,  My hand and arm followed it as far up the pipes as they could but it was always just out of reach.
After I realized that my phone had entered the point of no return I grabbed the soap and scrubbed my arm and then after that I scrubbed it some more to get all of the toilet off of it.  I dried off and walked out of the room with a feeling of both embarrassment because I had my phone in the bathroom and hilarity due to what seems like a pretty unique situation.  I have heard many stories since i began sharing mine of phones that have fallen victim to the toilet, but there is one element of my story that makes it one for the history books, and that is the timing of my phones decent from my shorts to the bowl and then its subsequent journey up the pipes.
So in conclusion, I send out a plea.  Does anyone have an old but usable verizon phone that they would care to donate to a poor college student who is planning a wedding and needs a good working phone?  I am using Matt's right now, but it holds charge like an 80 year old man.
Posted by A* at 10:22 AM No comments: 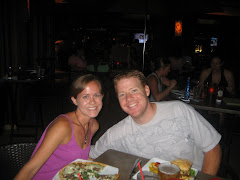 A*
Laguna Beach, CA, United States
I am on the road to becoming a teacher. It is an amazing road, bumpy and alive, but it is truly a passion that lives within me. Another of my passions is living, as much as I can, a green lifestyle. There is nothing better than mending our Earth so our children's children will be able to breathe clean air.